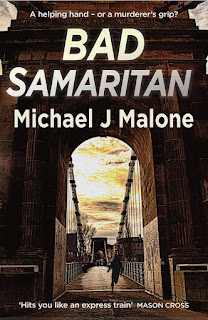 One of my favourite reads this year was ‘A Taste For Malice’ by Michael J Malone. I enjoyed it so much I popped along to his book launch in Waterstones where he was promoting ‘Bad Samaritan’ – the third in the Ray McBain series. After Michael’s very entertaining grilling on stage I hung out with the man himself later in Sloans, and after plying him with enough alcohol he finally agreed to be interviewed by Strachan McQuade.


Michael J Malone is yet another Scottish writer to graduate from the Tartan Noir talent pool. His three Ray McBain books are gritty, violent, and studded with sharp humour. Go read them. I loved them so much I almost feel guilty over setting him up with the Rev McQuade. But… as they say - that’s Shoebiz.

McQuade: By Jove, Malone! The Glasgow Necropolis! What an excellent choice of venue to conduct this interview. From up here at the top we have a commanding view of Glasgow Cathedral, the Royal Infirmary, Provand’s Lordship, and best of all, the brewery! And look! Here’s the famous statue of John Knox, father of Scottish Presbyterianism. I remember one year at the Church of Scotland Synod I won second prize in the raffle and took home a 2000 piece jigsaw of Knox playing table tennis with his ‘bestie’ John Calvin. I still have it somewhere at home although there’s a few bits missing now. Can you guess which bits are missing, Malone? 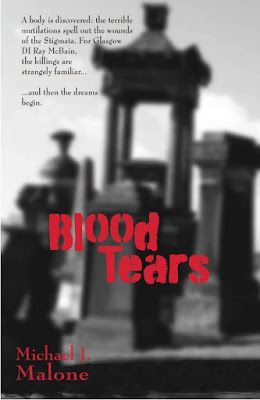 McQuade: Quite correct. Give that man a coconut... or two. Anyway, just saying the Necropolis is a good call. I know loads of stuff about it most people wouldn’t. I know every nook and cranny from the entrance at the Bridge of Thighs all the way up the Hill of Legs. Or is it Torsos? Never mind. Down to business, Malone. In your book ‘Blood Tears’ – your dietary-challenged anti-hero, Ray McBain, starts off as being overweight and gradually slims down by way of healthy eating and regular exercise. In the second book ‘A Taste for Malice’ he’s slipped back and put on the beef again, but at least is seen to be making a conscious effort to lose a few pounds. I haven’t yet read the third book in the series ‘Bad Samaritan’ (despite you signing a personal copy for me) and I realise this may qualify as a ‘Spoiler’ to some of your ardent readers, but did McBain eventually lose those extra pounds? Or did he give in to the lure of Greggs Bakery and remain a fat git? And as you ponder your answer while chomping on that ill-advised sausage roll, also consider this – have you any plans for sexually overactive detective, Ray McBain to release a ‘Roger Yourself Into Shape’ fitness DVD any time soon? 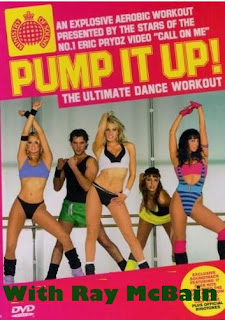 Malone: McBain is on the yo-yo diet thing, so he’ll never be able to walk past Greggs without jamming (see what I did there?) in a doughnut or three. After, of course, he rams in a couple of steak whatsits. Then he’ll go for a jog, while filled with self-loathing. 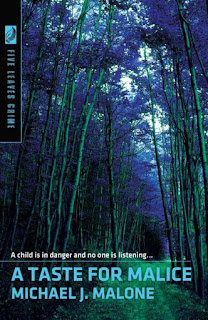 McQuade: I suffer from stealth-loathing. I sneak up on people, loathe them while they’re not looking, then sneak off again. It’s great fun. Tell you what, Malone. Why don’t we have a laugh by digging up one of these old graves. Who knows, there might be some valuables we can flog on the Antiques Roadshow. Luckily I’ve brought my collapsible spade, but due to my advanced age you can do all the digging while I continue to bombard you with interesting questions. Oh come on, you can do better than that. Put your back into it, man! And mind you don’t get a blister. This blog page isn’t insured to cover accidental injuries. Or erm… death.


Now, most crime writers I’ve spoken to like to talk a good game where dead bodies are concerned, but when confronted with the real thing they go all squidgy and gooey, a bit like the cadavers themselves come to think of it. Have you ever been in close proximity to violent death? And if so, how did you react? Were you brave and fearless, or did you pee your pants like a big Jessie? No, don’t stop working. You can talk and dig at the same time.


Malone: S’easy for you to say, McQuade standing there in your plus fours and monocle. And as for dead bodies? That would be a big no thanks. I don’t know if it’s an age thing but I have become more squeamish. 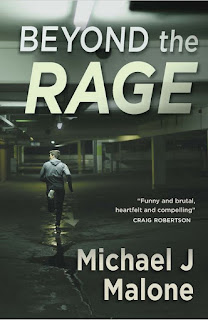 Last summer I had a pot in my back garden that filled with rain water (we get rain here, dontcha know) and one morning I looked in to see a family of drowned mice. The mum and two babies. I was traumatised. I kept imagining the babies climbing in to investigate – oh, what’s this? A swimming pool in our back garden?  – their panicked squeals when they couldn’t get out – mum climbing in to rescue them and then all of them swimming in circles – wee feet paddling for all they were worth until exhaustion took them, and their lungs filled with …


Having an imagination can be a bad thing.

McQuade: Sob. Stop it. Stop it. You’re making me blubber. I once had a pet gerbil I took to the seaside to teach how to surf on a lollypop stick. It didn’t actually drown, instead it was eaten by a big dog that ran in the water for a paddle.


On a cheerier note, I see you have a fetish for bow ties. I myself have never seen the appeal of neckwear designed to look like specialist pasta, but I do sometimes sport a cane when I’m in a devil-may-care mood. Do any of your bow ties spin round when you feel the need for a cheap laugh? Or perhaps just to punctuate a smutty remark.

Malone: How very dare you?! Please don’t equate my effort at style with cheap baubles from a joke shop. That bow tie featured on Jeremy Kyle and cost at least £1.99.


McQuade: Why was your bow tie on The Jeremy Kyle Show? Had it impregnated a group of seventeen year old triplets and then jilted them to elope with their 94 year old transgender great-grandfather? In fact I really don’t want to know. Anyway, you’re now so far down in that grave you may have to shout out your answers. Have to say I’m impressed with your effort despite the fact your trousers have now split up the back. Now, you hail from Ayr, a town that has contributed much to the cutting edge of Scottish culture by way of quality potatoes, steeple-chasing, and ahem… Ally McLeod. Do you subscribe to the theory, which I just made up a moment ago, that the town maketh the writer? And if so, what in particular about Ayr has contributed to your development as a writer?


Malone: You’re missing that poet fellow, Burns I think his name is. He’s got a bit of a rep. To be fair, I think there’s something in the water down here, there’s so much writing talent in Ayrshire. I won’t bother naming them all because this is about ME.


McQuade: I did remember Rabbie Burns, I just never rated him. If he was so good then why was he never approached to write lyrics for Kenneth McKellar or even Moira Anderson? Speaks for itself. Oh, look, there’s the coffin. Smash it in with the spade and we’ll see what’s in there.


McQuade: Any luck. Found any valuable rings or trinkets?


Malone: Nothing valuable. Just a scruffily dressed corpse. Looks quite fresh and there’s only a faint smell. I’m getting notes of curry and cigarettes. Port and after-eight mints. Wait. It’s got a tag on its toe. I’ll just use the torch app on my phone and see what it says. Mmm. Interesting. Who’s Allan Watson?


McQuade: Ah. He’s my carer. I wondered where he’d been lately. There’s no chance of finding any valuable loot in his grave. Still, it was worth a try I suppose. Now, how the blazes are you going to climb back out?


McQuade: Drat. Looks like we’ve been rumbled. Still, no point in both of us getting nicked. Thanks for the interview, Malone. And please post my spade back if you don’t mind.